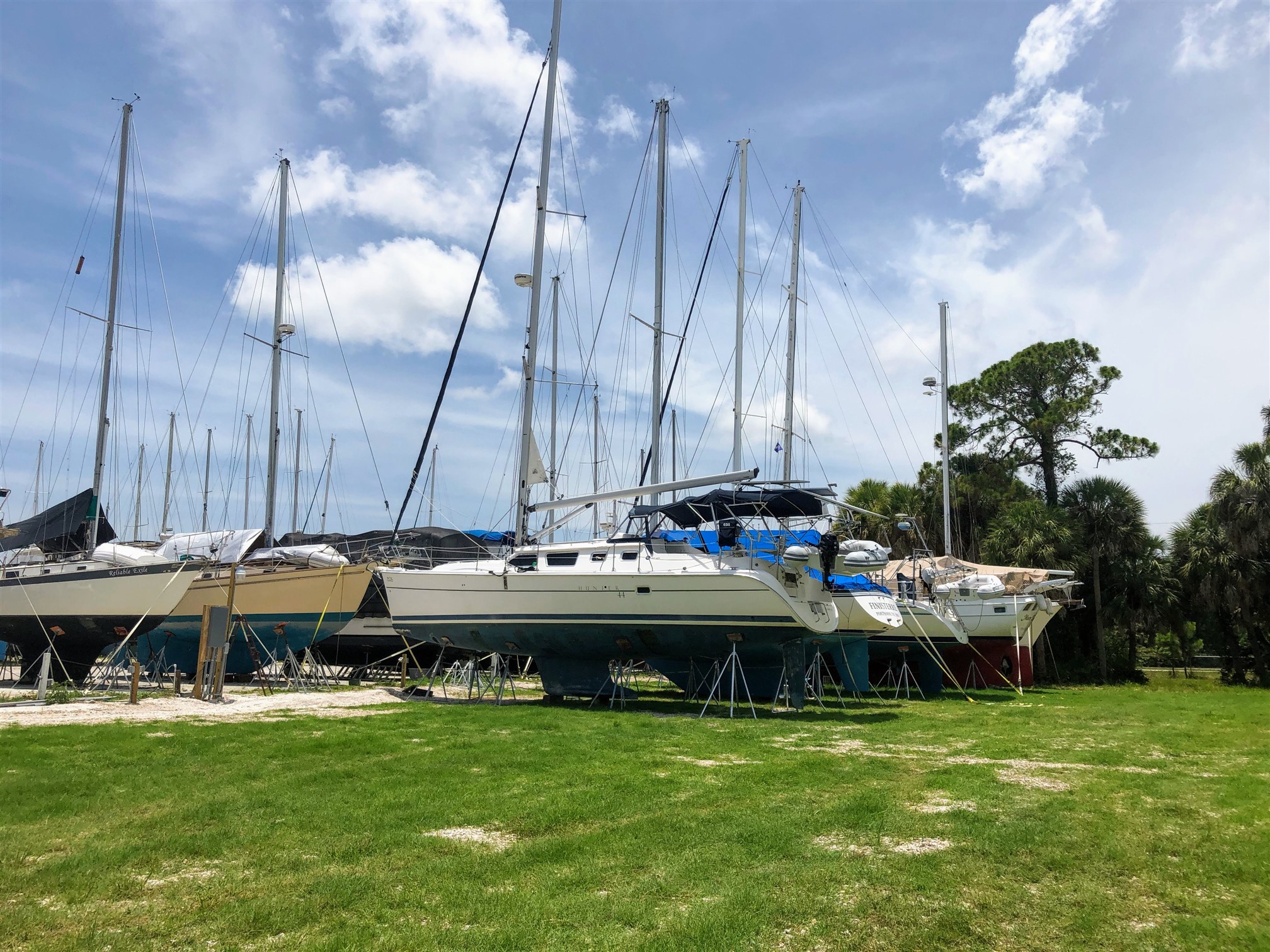 We have enjoyed sailing in the Charlotte Harbor, Caya Costa Island State Park and Cabbage Key. During May the love bugs have been a real issue even to the point of following us across Charlotte Harbor, not to mention the bugs that get on the car.  This has been one of the worst years for love bugs.  At the same time the evening temperatures are rising so it’s not that comfortable anchoring out.  We will be spending most of the summer in New England visiting family and friends.  We will spend time in September and October visiting the United Kingdom so we decided that it would be best to have the BlueBreeze taken out of the water.  We found a boat storage facility that offered bottom cleaning and painting as well as a broad range of marine services.  The boat will be tied down to withstand hurricane force winds.  We plan on putting the BlueBreeze back in the water in late October.

It was a sad day knowing that we wouldn’t be back on the water until late October.  Since taking ownership of the boat and departing Annapolis at the end of October 2018, we have spent about 77 nights on the boat.  With each day that we spend on the boat it becomes more a part of out lives as houses have in the past.  Over this past nine months we have become acquainted with the boat from giving it a new name to understanding all of its technology, engine, sails and rigging.  We can now put them all together and she just comes alive as we glide across the water under sail.  It was a nice day when we left Burnt Store Marina, with a wind out of the south west.  We left early enough that we could put out the jib and just cruise along as the tide rose so that we could get into the lock at peak high tide.  We reached the lock at peak high tide and were able to go thru the lock without running aground.  Unfortunately the wind had picked up and was blowing us against the wrong side of the lock.  There were two other boats lined up to use the lock so one of the other boaters helped by activating the locks so we could get thru.  Once thru, we went down the canals for about 5 miles with the keel close to the bottom most of the way.  We arrived at Safe Cove in mid afternoon and tied up at their dock for boats going in and out.  Once we were settled, it was time to celebrate with a Blue Breeze cocktail.  The next morning we unloaded after breakfast, then the dock men came to pull the BlueBreeze out of the water.  When going from the water to the blocks in the yard its almost like she has two personalities.  When on the water she glides so effortlessly along waiting on the captain to bring together the sails and the wind.  Below the waterline and out of sight is a design that makes this all possible,  the waterline, keel and rudder.  Once out of the water, you can see the boat in its entirety and appreciate its lines and design as it awaits the next opportunity to get in the water and show what she can do. 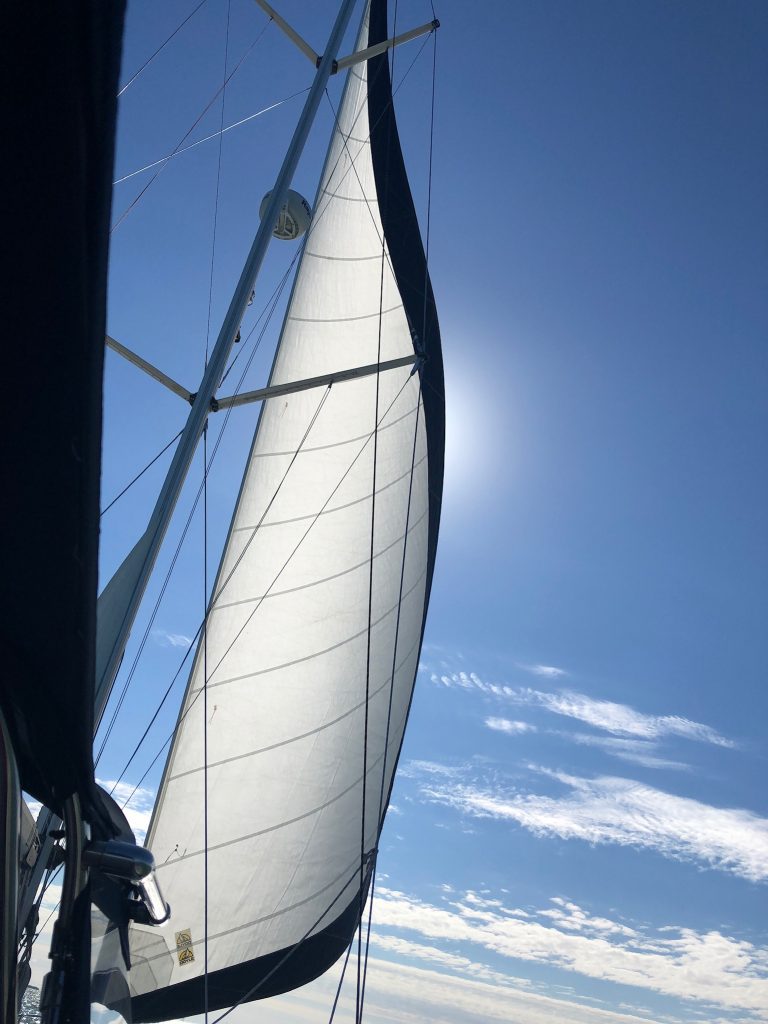 Cruising up Charlotte Harbor under jib. 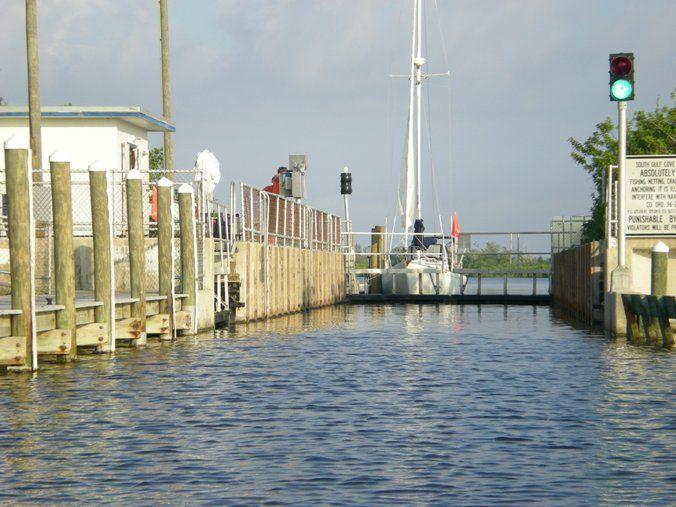 South Gulf Cove Lock – believed to be the only self operating lock left in the US. 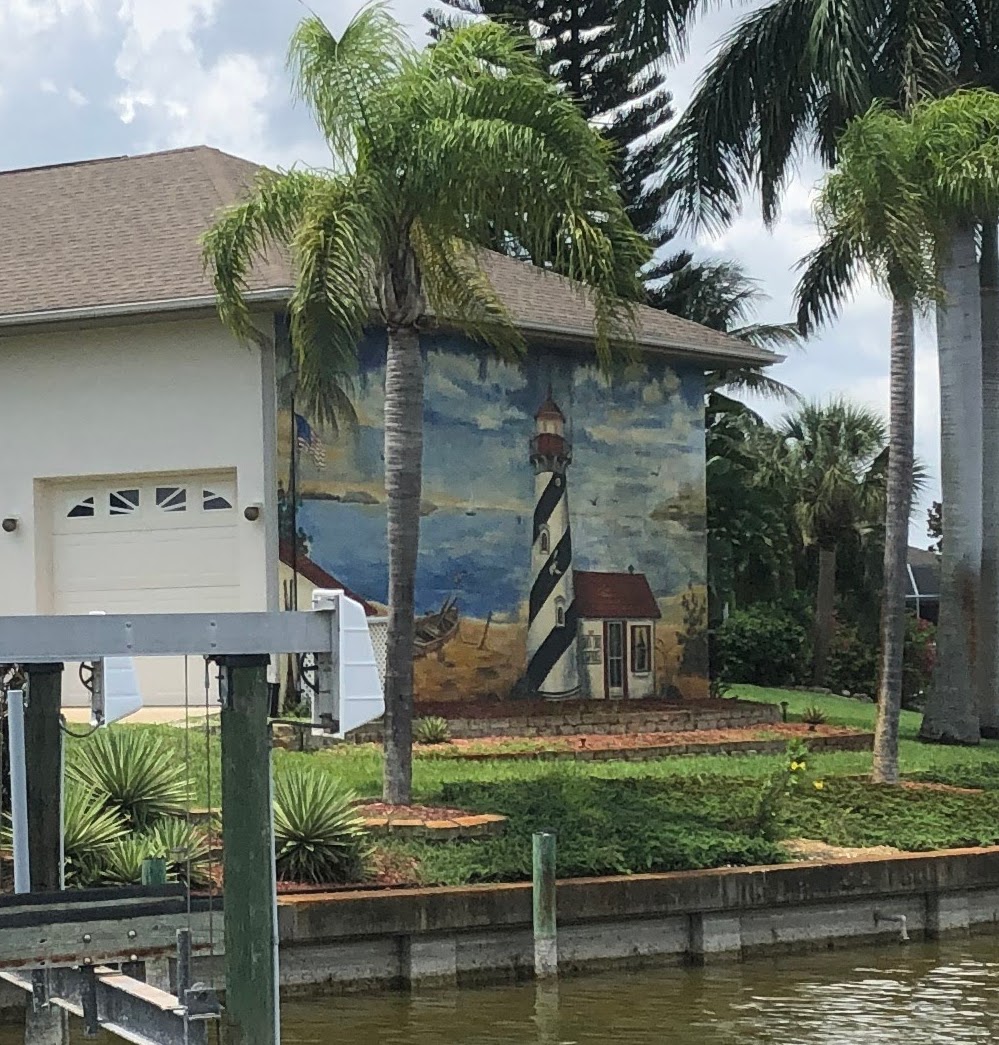 This was the back of one of the garages along the canal leading to Safe Cove. 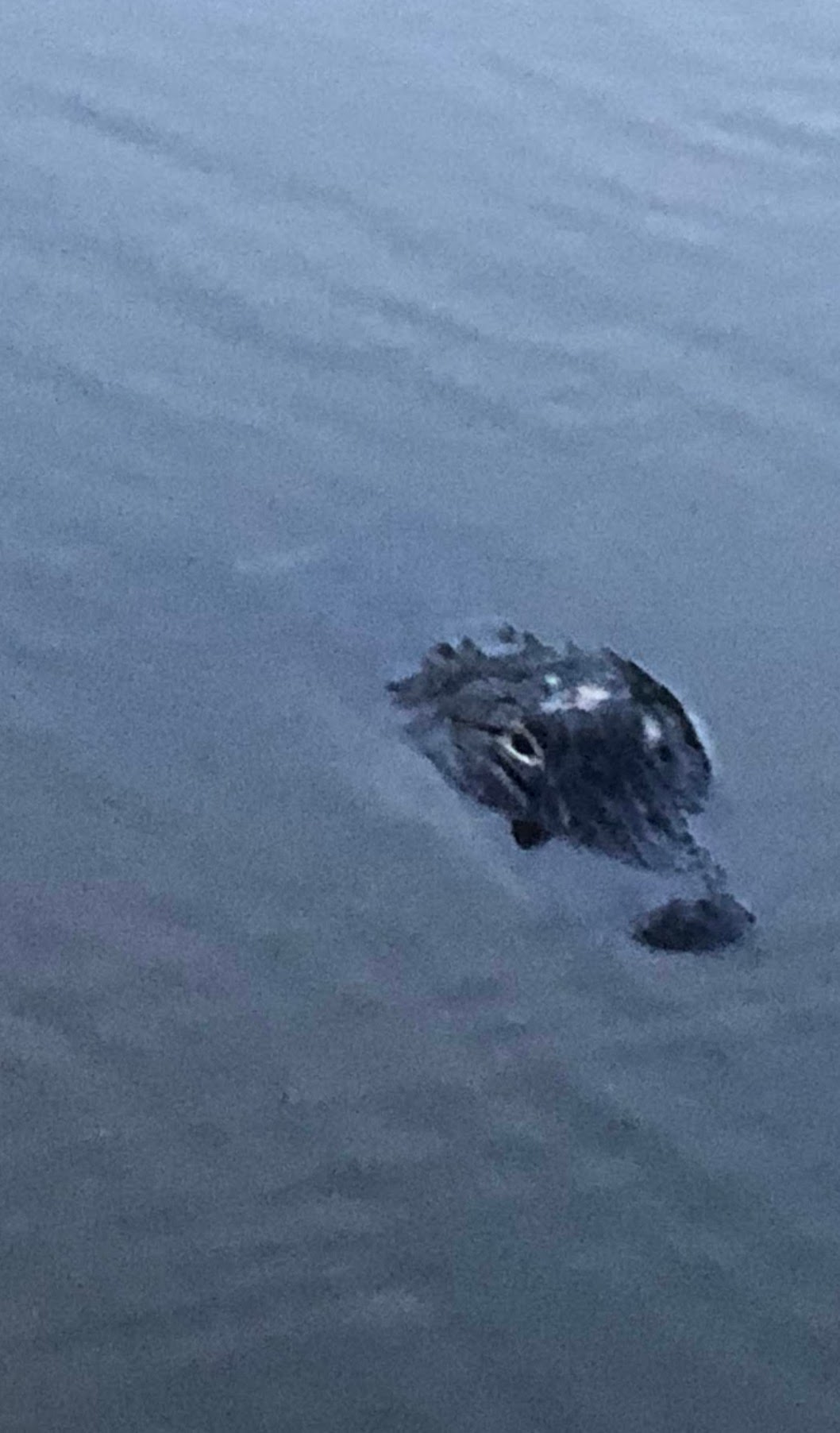 We had a friend as we enjoyed Blue Breezes at the Safe Cove dock. 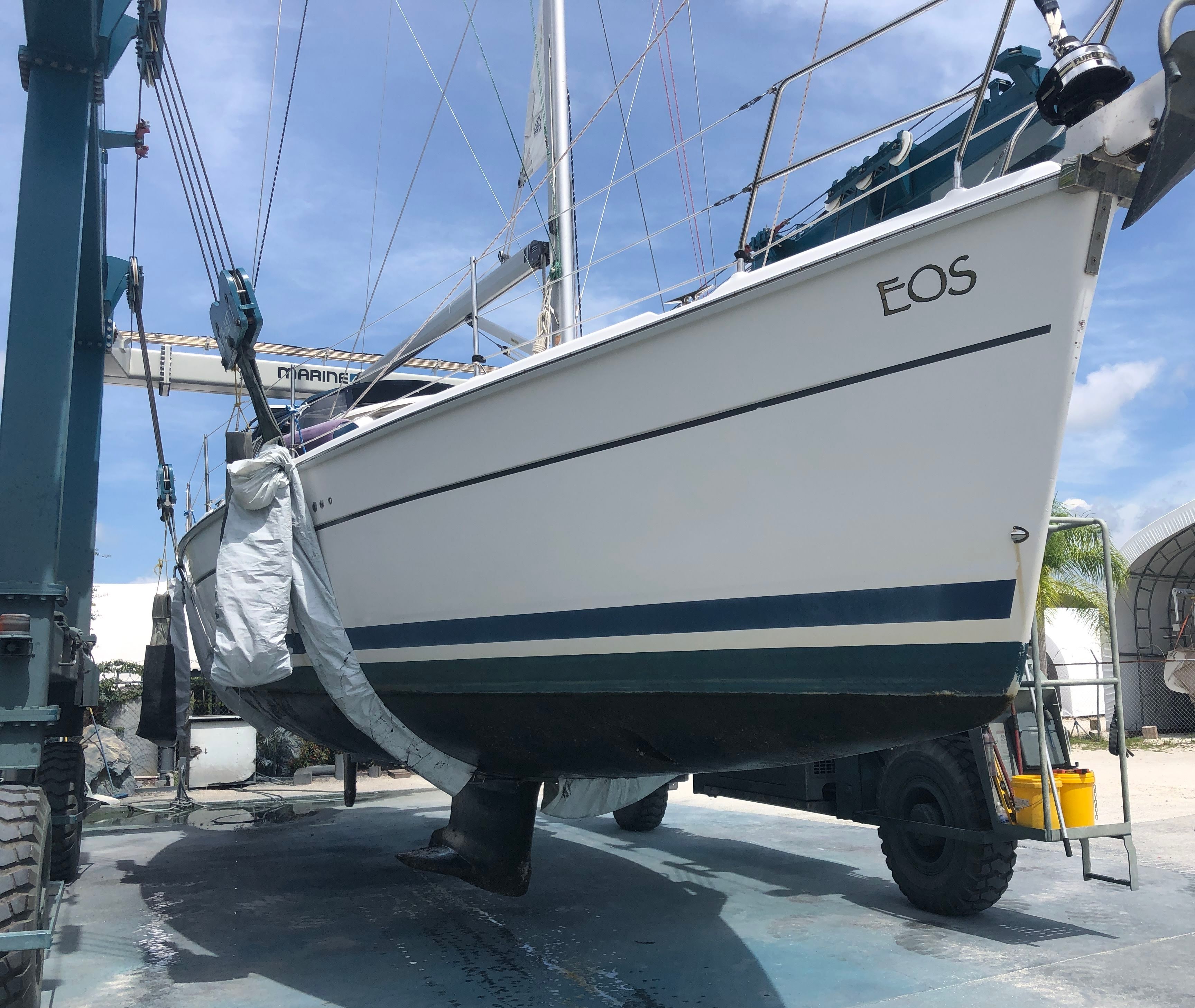 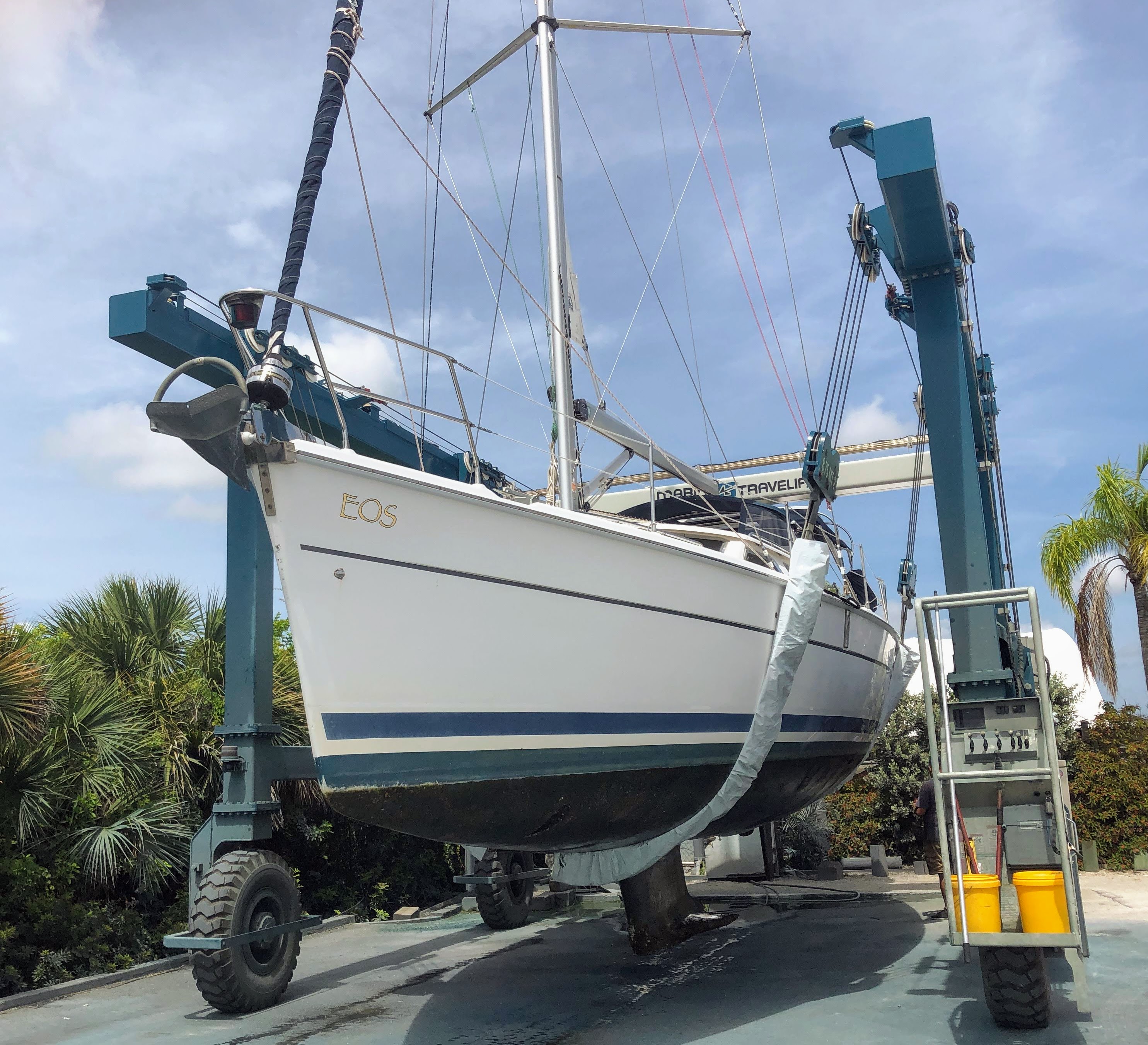 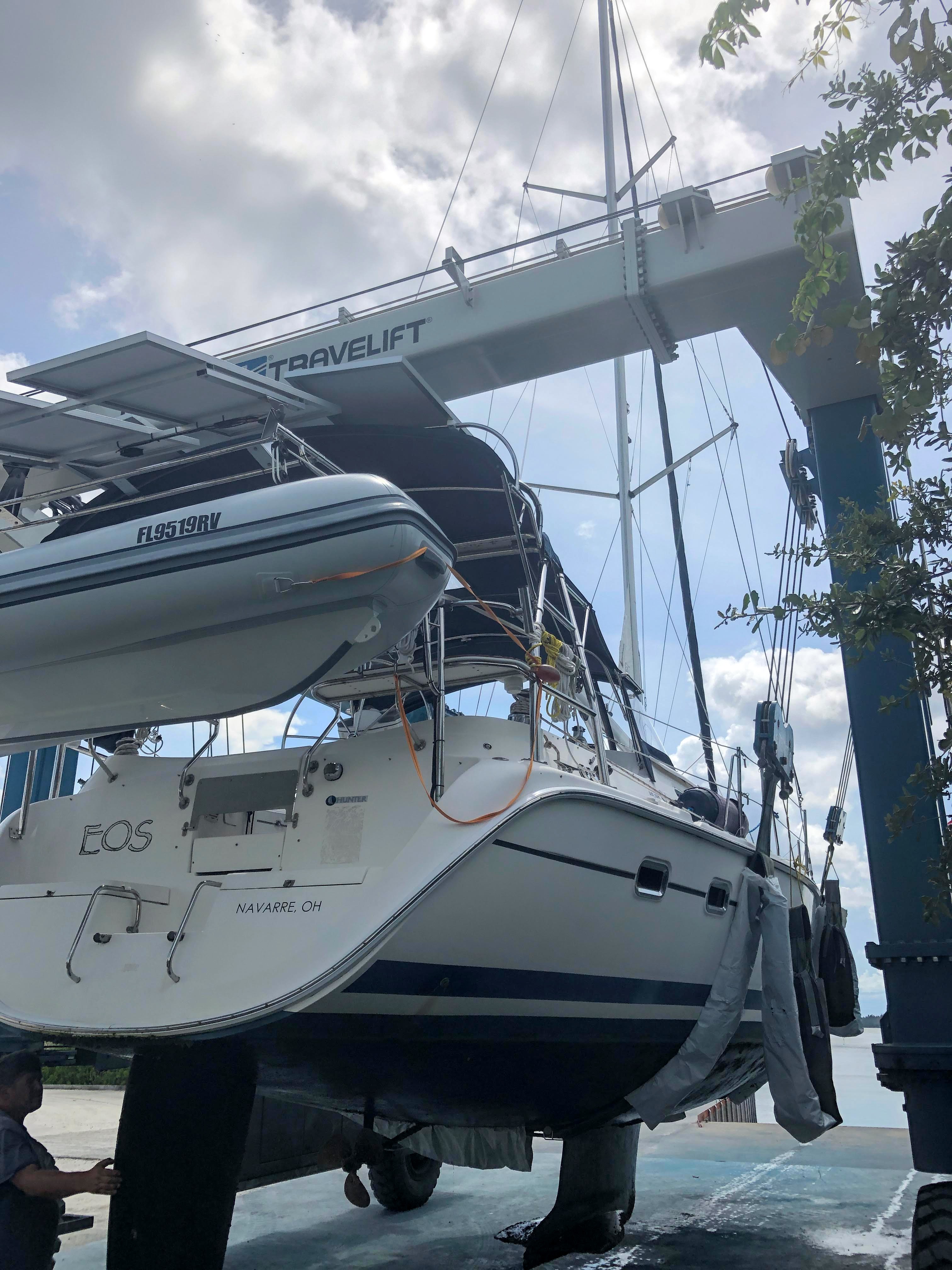 Out of the water and about to have the bottom power washed.

BlueBreeze in her home for hurricane season.

2 Replies to “Taking the BlueBreeze out of the water for hurricane season! June 2019”