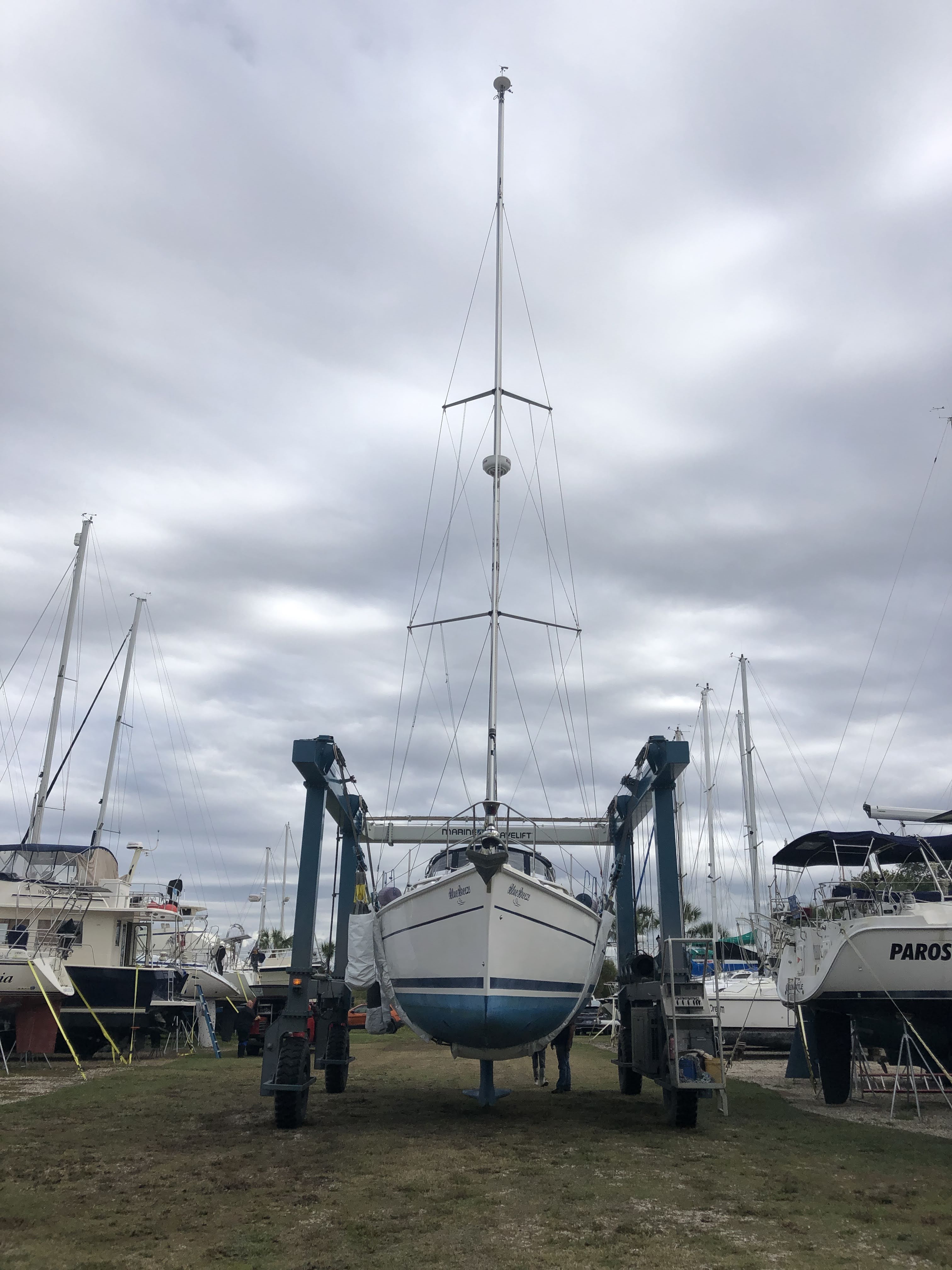 The term “splashing” is used by shipyards to mean putting the boat back in the water.  We got quite a few of projects taken care of the past summer in addition to protecting the BlueBreeze from hurricanes. This year there were numerous hurricanes but on one even came close to Safe Cove Marina in Port Charlotte, Florida.  The projects were:

We continued replacing the running rigging such as lines used for the main sheet.  We also replaced the turning blocks located at the bottom of the mast which directs lines back to the cockpit.  The lifelines that can be opened to allow getting onto the boat were rusted and so they were replaced.

When taking down the canvas Bimini and dodger for cleaning and waterproofing, we discovered that both windows that allow you to see the sails above were broken and needed to be replaced.  We found a really good canvas company that cleaned, repaired, replaced zippers and waterproofed the Bimini.

Two of the windows had started to leak and needed to be re-seated.

We bought a trailer for the dinghy so that we could store it back in Lake Placid as well as use it during the summer.  We did explore a number of the lakes in the area.  We also added some deck hardware such as cleats and a rod holder.  I changed the oil and lubricant used in the lower unit of the outboard.

The anchor needed a new shackle system so I replaced it by one made by Mantus Marine.  It is a stainless steel and high quality piece.  I also replaced the snubber which is the line that absorbs the shock of the boat pulling on the anchor chain.  It also helps the boat stay straighter while at anchor.  I cleaned out the anchor locker so that while bringing in the anchor chain, it doesn’t bunch up and requires less attention while bringing the anchor up.

We had someone repair some of the fiberglass dings at the stern and the bow,

We are slowly developing a list of craftspeople that once they do some work on the boat, we can assess their skill and when we need work done we can call on them.  So far we have found:

Gulf Coast Rigging – that have done most of the work on the rigging so far and we will probably replace the standing rigging next year that is quite a project.

Southern Gulf Marine – Troy installed the new battery bank and does all of the electric work on the boat.

Action Fiberglass – As the boat ages there is ongoing fiberglass work that needs to be done.

Friendship Marine – They installed the solar panels with all of the wiring and controllers.  They are certified in all forms of marine electronics.

Fortune Canvas – they did the work on the Bimini top. 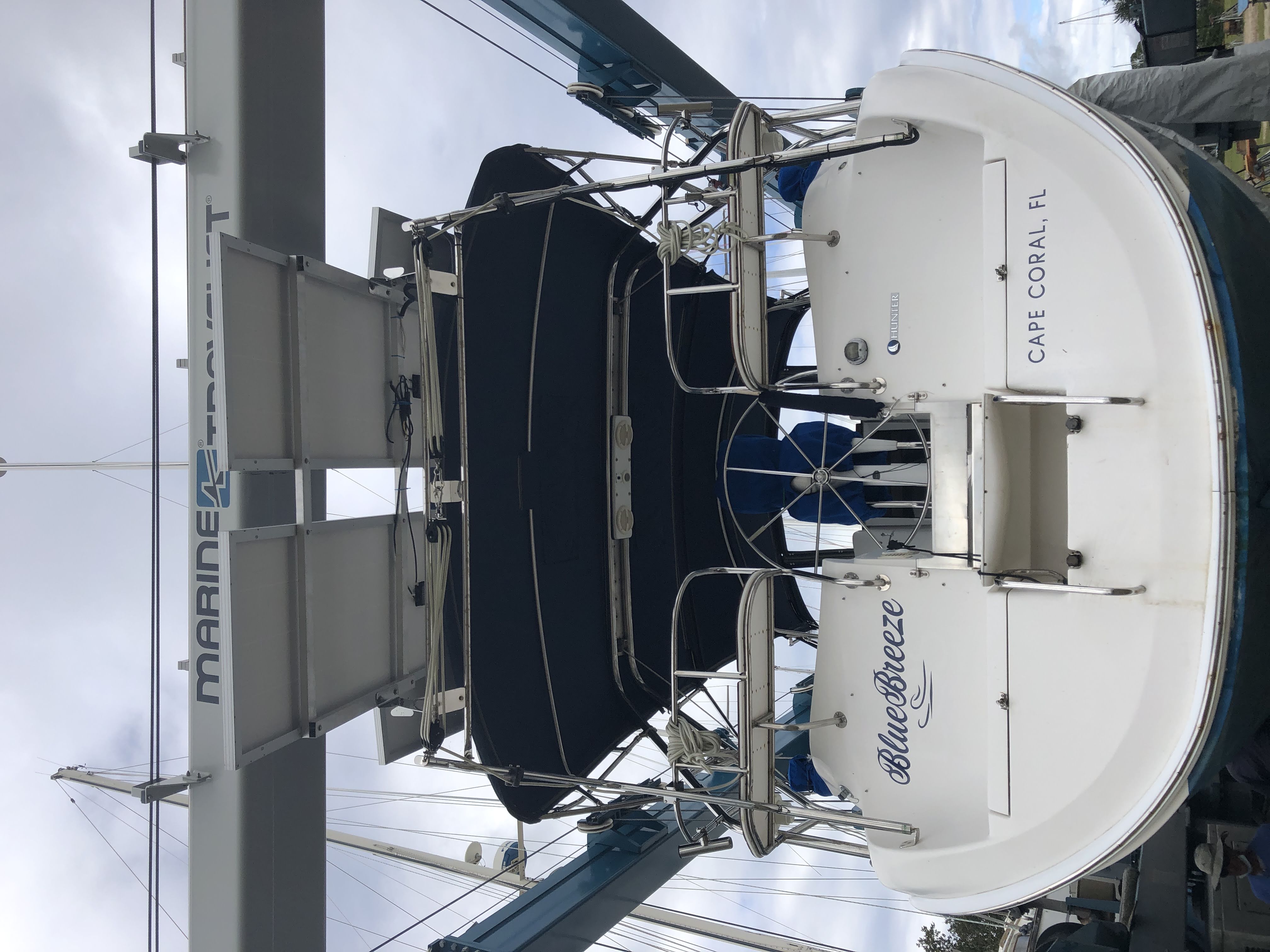 After going up to Sherborn, Ma to help our Son and Daughter-in-law with our newest grandchild, we returned and began to complete all of the work mentioned above.  We then set a splash date of December 7, 2020.  It was just our luck that a cold front came along so it was sunny but cold for Florida.  The boat was to be splashed at 12:30 PM.  All went well until we got the signal to proceed out of the splash dock.  I thought that they had totally dropped the straps and the two techs were on either side of the bow.  I could see them but not hear them.  Apparently they said that they would push the boat out of the splash dock.  I thought that I was supposed to put the engine in forward and drive out.  When I did, the strap became caught in the prop so the engine stopped.  They had to lift the boat back out of the water, remove the strap from the prop and put it back in the water.  They then pushed the boat out of the splash dock.  We motored up and down the channel and everything with the engine and prop seemed OK so we tied up to the dock for the night.  BlueBreeze being moved with the Travel-Lift

The next morning we got up fairly early for us retired folks, had breakfast and prepared to get underway.  We decided to put up the jib in case we could use it to sail south to Burnt Store Marina.  We got underway at about 10:30am with a 9:00 AM high tide.  A two or three hour either direction of high tide had been OK in the past, but not this time.  The trip from the marina to the locks was about normal.  We almost never had more than a foot of clearance from the bottom.

The locks are difficult with our size boat and just two people.  We made it thru the first gate and were able to close it behind us.  We opened the second gate and the water rushed out along with us.  The wind was blowing pretty hard off of the port bow so it was blowing us away from the dock where the handle to close the lock was located.  We were having a real hard time closing the second lock until another boater came along and helped us close the lock.  The odd thing was that we were aground right in front of the lock.  We managed with a lot of movement of the boat back and forth able to get away from the lock and allow the other boater to get through.  We spent the next 3 hours going the next 200 yards at which time we gave up and called BoatUS which is like AAA on the road.  They sent a tow boat to help tow us the rest of the way to the channel which was only about 100 yards.  He mentioned that at this point of the channel, there were a few bumps to get over.  Since it was going to take a little over an hour for the tow boat to get to us, I tried backing up and going forward in a different direction.  It worked and we were able to go forward.  We hit bottom about three more times but made it to the channel.  About that time the tow boat arrived.  We confirmed that all was all right and thanked him for his help.  At this point it was too late to make it to Burnt Store Marina before dark so we headed across Charlotte Harbor to a place called Alligator Creek where Aqua Maps showed a somewhat protected anchorage.  It turned out to be  a nice anchorage and overnight the wind died down but it also got down into the low 40’s so a bit chilly.

The next morning we got up and after a nice breakfast, brought up the anchor and motored on down to Burnt Store Marina.  It was a beautiful day but remained chilly.  When we arrived we were pleased to have two of the boat owners nearby help us get into the slip.  We set all of the lines for easy coming and going in the future and plugged in the 110 volt extension cords.

Not much time to do anything else so had some lunch then headed to Safe Cove to pick up the other car and head back to Lake Placid.

In the future we will always hit the locks at high tide to try and avoid the problems of grounding.

3 Replies to “Splashing the BlueBreeze – December 2020”