Last night we passed up a very nice looking anchorage for a face dock at the Swan Point Marina in Sneads Ferry in order to obtain electricity for heat after a brutally cold day on the water.  The plan was to do laundry however due to Hurricane Florence the marina had been all but destroyed.  Prior to the hurricane there had been a mother daughter team of bakers that would bring fresh baked goods to the boats at the marina.  It appeared the caretaker as going to leave shortly and it doesn’t look good for a spring opening.  This part of North Carolina was heavily damaged and the effects can still be seen with roofs still covered with plastic and boats still sitting in the water and broken.  We traveled close to sixty nautical miles today.  It would be the first of many over 50 mile days as we get used to the boat and navigating the ICW. 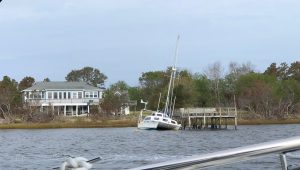 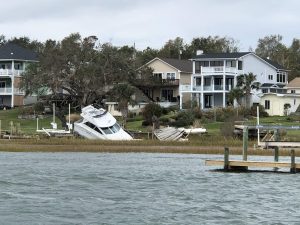 We originally planned to anchor this night but weather proved that unwise.  There were predictions of a thunderstorm and high winds.  Instead, we found Carolina Beach Yacht Club and Marina that welcomed transients (passing through) and provided a discount for BoatUS, like AAA for boats and provided us fuel when we ran out.  It was tricky getting into a tight slip and running current but Jack has mastered with the use of the bow thruster.  The storm began so laundry still did not get done but completed the blog instead.